Communications writer at Avis Budget Group, Hannah Warsop, recently spent two weeks volunteering at the Wildlife SOS bear and elephant sanctuaries near Agra. In her blog, she explains why a visit to the elephant sanctuary is the perfect day out for tourists and locals alike, and a great way to support the ongoing conservation of some of India’s most beautiful and endangered animals.

As I drove into Wildlife SOS’ Elephant sanctuary earlier this year, nothing could have prepared me for the overwhelming feeling of seeing these gentle giants for the first time. It’s one thing seeing elephants on TV, or even in a zoo, but when you see a whole group of them in the flesh, playing, eating, bathing and generally loving life, it’s incredibly moving. 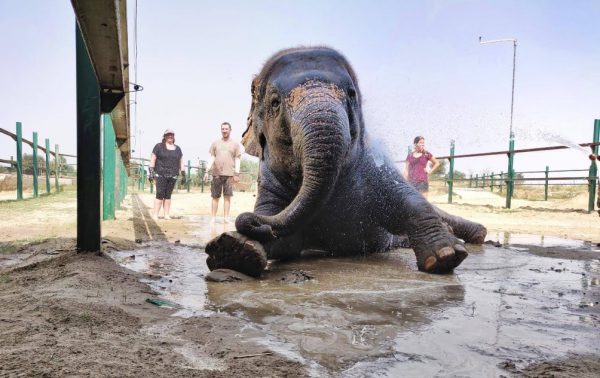 Like many people, I love animals. And for a while now, I’ve been learning about the increasing risks to animals in the wild such as elephants, bears, rhinos and big cats. One of the biggest black-market industries in the world is wildlife trafficking, where animals are hunted and sold for tourist attractions, medicine, ivory and fur. Also like many people, I felt helpless when considering the scale of the problem; and then I came across Wildlife SOS. 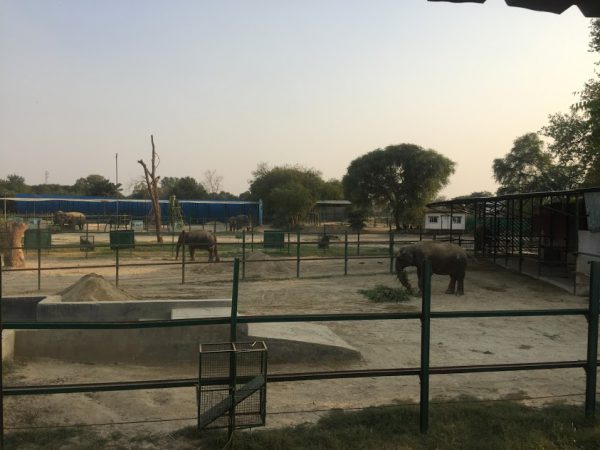 The elephant sanctuary from the observation deck

Kartick Satyanarayan and Geeta Seshamani founded Wildlife SOS over twenty years ago, after harbouring a dream of rescuing captive wild animals in India. Since then, he has built dedicated sanctuaries for sloth bears and elephants and recently opened the very first elephant hospital in India to worldwide acclaim. Wildlife SOS welcomes volunteers from around the world to spend a day, week or longer caring for the animals and helping the charity run its busy daily schedule.

The other volunteers and me chopping fruit for the elephants’ lunch!

The elephants live in enclosures of two and spend their days taking long walks with their friends and keepers (‘mahouts’), paddling in their pools, eating, sleeping and being pampered by the staff and volunteers! As a volunteer, I spent alternate days at the bear and elephant sanctuaries with the other volunteers undertaking essential tasks such as chopping fruit, preparing porridge and honey for the bears (it’s true, bears really do love honey!), cleaning enclosures, painting and building enrichment structures. 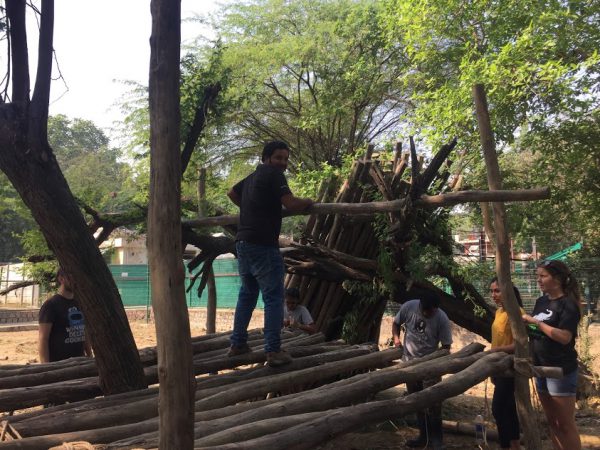 Building enrichment structures for the bears to climb and play on

Visitors are taken on personalised, guided two-hour tours of the sanctuary and learn about the history of the animals and how they came to be rescued. Some of the stories, such as Raju’s who cried when he was rescued after 70 years as a riding elephant, will move, astound, and ultimately inspire you. Visitors have a truly unique opportunity to be close to the elephants, feed and walk with them. Although you can’t touch the bears (they are cute but can be pretty feisty!) you can observe them from close proximity. 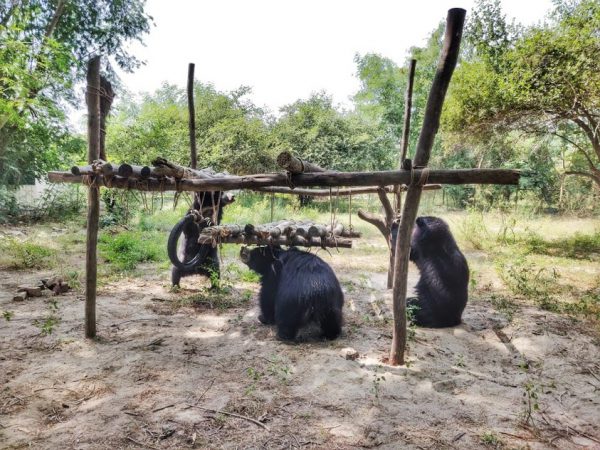 The bears foraging for treats

A haven for children

Children are equally if not more, drawn to animals than adults. I saw many children come to the sanctuary, and watching their faces light up in awe and wonder at these gigantic creatures in front of them was a joy to witness. As visitors, you can get close to the elephants but not excessively touch them – even though they’ve been around humans their whole lives, it’s important to remember that they are strong, wild (and wilful!) animals. 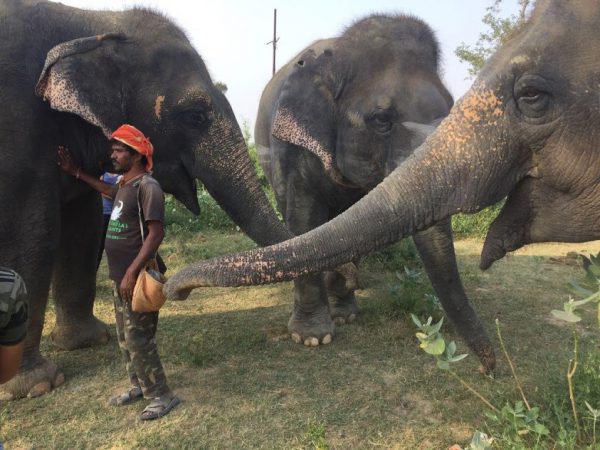 Stealing peanuts on a daily walk!

Wildlife SOS isn’t just dedicated to rescuing animals, but also supports the communities who have traditionally relied on using them for their livelihoods, such as the ‘Kalandars’, who have kept dancing bears for over 400 years. They fund the Kalandar children to go to school and offer advice and financial support to the adults to help them set up their own businesses. Through this continued, holistic effort to encourage the community to better themselves, WSOS has made an incredible difference in the lives of hundreds of Kalandar people and future generations. 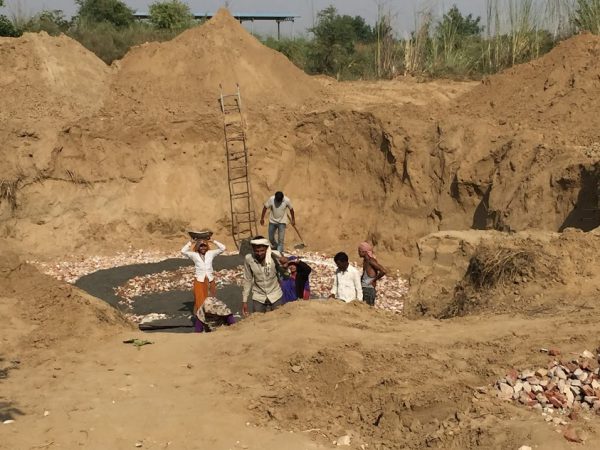 Staff working on the hydrotherapy pool at the elephant hospital

Each sanctuary has a gift shop selling items, hand-made by the Kalandar women. The women are trained by WSOS in traditional Indian crafts and you will find the shop bursting with beautiful, colourful and intricate trinkets and mementoes. You even have the opportunity of owning a truly original piece of art: an elephant-footprint-on-canvas, created by the incredibly talented residents themselves! 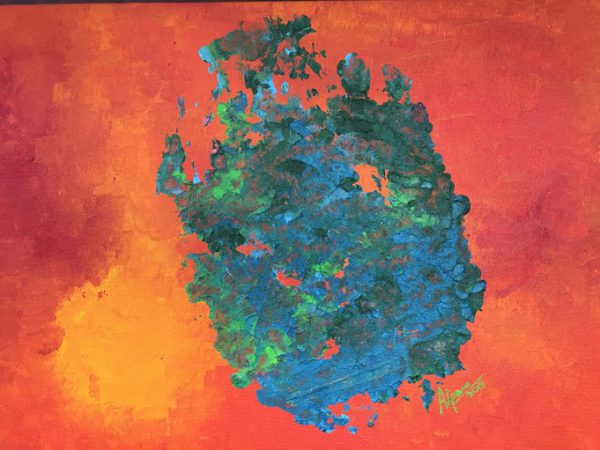 A beautiful and original piece of ele-art!

And finally, it goes without saying: when visiting India … ride in an awesome Avis car, not on an elephant!

You can enjoy a personal guided experience at the Bear or Elephant Conservation and Care Center during the following times: 9 am – 11 am, 11 am – 1 pm and 3 pm – 5 pm.

More information and how to book

There are approximately 17,000 captive elephants in the world, around 4,000 are in India. For centuries, these majestic creatures have been used for travel, lodging, entertainment, begging, and even meat. Nowadays, they are mainly used in religious ceremonies, in circuses and for tourist rides. And, while they may appear compliant, the elephants involved in such activities are always subject to terrible and sometimes fatal conditions.

Bears in Asia are mainly used for bile farming but in India, they’ve been used as dancing bears for around 500 years. All the 200 sloth bears at the sanctuary are former dancing bears. Incredibly, the practice has been completely eradicated in India by Wildlife SOS through offering the Kalandars training and jobs at the facility.